I am a mother fucking playwright.

I wanted to go with something a little more elegant to open this, but really, “I am a mother fucking playwright” pretty much sums up what’s going through my mind right now. I think it’s an apt description: I wrote a play and it’s getting produced. Hence, “I am a playwright.” “Mother fucking” was added for color because I like to swear, and don’t get to do so often because of the constant presence of my 7-year old daughter.

This weekend marks the culmination of many years spent writing the play in question, and even more years writing (and more often than not, not-writing) and claiming that I was a “writer,” even though the reality was more hobbyist writer than professionally recognized writer. Oh sure, I’m a technical writer by trade (favorite joke stolen and paraphrased from the game Fallout 3: “They asked me if I was a technical writer. I said, ‘Technically, I’m a writer,’ and they hired me.”) so technically (oh puns, is no other form of humor as great as thee?) I am a writer by profession, too. It’s just that very few aspiring writers, sustaining themselves on dreams of the next great American novel, consider a pay-the-bills writing job the pinnacle of their hopes and dreams. Don’t get me wrong: I actually like my day job. Coworkers claim to pity me when I get a major documentation project, but I love being tasked with documenting disaster recovery test procedures or mapping the process flows behind automated phone systems. I’m like that weird kid in class who always ate paste and got excited by the prospect of homework.

And I suppose it’s disingenuous of me to leave out the fact that I have, in fact, had several plays put on in front of audiences. I’ve participated in three 24-hour play competitions (12 hours to write on randomly chosen topics, 12 hours for the director and cast to rehearse and put on the play), been part of the Best-In-Show winners in two of those, and had one of those shorts repurposed and put on as a part of another anthology of short plays. Those were amazing experiences, fueled by passion, sleep-deprivation, and, well, lots of booze. “Write drunk, edit sober” Hemmingway supposedly said, but I’ve never had much use for editing, anyway. Those plays were fun, and an amazing experience (and I hope to do more), but I still felt like the true designation of playwright had to come after a full-length play, put on for than one night, and possibly reviewed by someone, somewhere.

This weekend (Saturday, August 8th, for posterity’s sake), a full 14 or so years after a pretty-good script was spawned from a stupid idea and put in the hands of a great director and cast, I will be a mother god-damn-fucking playwright. The Importance of Eating Earnest is going to run for something like ten shows in Houston, Texas. It’s already seen a little bit of pre-show press. I expect it to be reviewed, and thanks to the strength of the cast and crew (and yes, my brilliant god-damned writing), I suspect those reviews will be strong. I really feel like I should go into this managing my own expectations to be cautious, but I can’t bring myself to do that, in no small part because the people bringing this story to life are too good and have worked too hard for me to even allow doubt to creep in. They won’t fail my words, and my words won’t fail them. 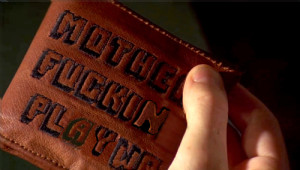 A Mother Fucking Photo Editor, However, I Am Not

So, even though the play hasn’t opened as of this writing, I’m still calling it.

I am a mother fucking playwright.